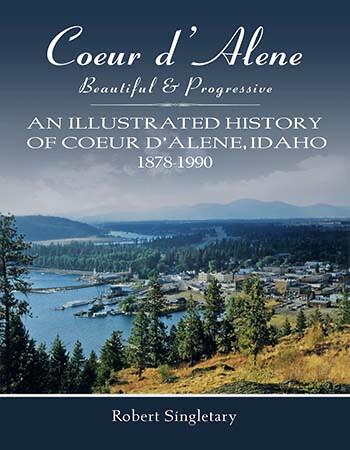 This beautiful hardbound book is a must have for anyone interested in Coeur d’Alene history. Over 300 photographs illustrate the historical development of Coeur d’Alene from its beginning on the outskirts of Fort Coeur d’Alene in 1878 to a modern and progressive city on the north shore of Lake Coeur d’Alene by 1990. Meticulously researched and written in a clear and unencumbered style, the author brings together a series of brief narratives that tells the story of Coeur d’Alene’s economic, political, social and cultural institutions. Included are the development of the city’s churches, schools and colleges, medical facilities, timber and other industries, buildings and stores, transportation, the library, the Coeur d’Alene Press, bands, orchestras and choirs, art galleries, clubs, entertainment, social activities and celebrations.

In the fall of 1940, Earl Somers and his wife, Byrd, moved to Coeur d’Alene with the idea of building an amusement park. Earl organized the Coeur d’Alene Lakeside Development Company and began meeting with city officials about leasing land for an amusement pier near the new Civic Center in the city park. It took Somers over a year to convince the city administration that his project was a good thing for Coeur d’Alene. In the spring of 1941, Somers was granted a 15- year lease for a 140 by 300-foot section of land for his amusement park, which became known as Playland Pier. The City hired George Schneberger to build the pier. By June of that year, walls were constructed and over 20,000 cubic yards of soil was trucked in to create the foundation for the pier. The first permanent structure was a 100 by 40-foot concession and arcade building with a 40-foot tower.

In late spring of 1942, several permanent rides were in place and ready to go. These included a Ferris wheel, a carousel, a miniature roller coaster and train for the kids, a loop-o-plane and a swing that went out over the water. The penny arcade consisted of several amusement machines, a shooting gallery and balloon dart games. Concessions included an array of souvenirs and novelties plus a soda fountain and sandwich shop. The grand opening for Playland Pier was July 4, 1942. From 1942 to 1974, Playland Pier, the small amusement park on the banks of Lake Coeur d’Alene, provided many fond memories for thousands of kids of all ages.

Author Robert Singletary is a native of Georgia, who came to North Idaho by way of Alaska, Robert Singletary holds a B.A. from the Alaska Pacific University and a Master’s degree from the University of Idaho. As a historian Robert Singletary frequently gives lectures, tours and living history presentations on the history of the Inland Northwest. Robert has authored numerous articles and other publications, including the Kootenai Chronicles through the Coeur d'Alene Press. He has served as a trustee for Idaho State Historical Society, the Museum of North Idaho and the Thomas Pane National Historical Association. He was the Kootenai County coordinator for the Idaho State Centennial celebration. He is the chairman of the Kootenai County Historic Preservation Commission. For many years, Robert taught history and humanities at North Idaho College, Lewis-Clark State College and the University of Idaho. In 2019 Robert was awarded the Idaho State Historical Society’s Esto Perpetua award for his work preserving and promoting Idaho’s history. He is also an accomplished musician, performing with numerous musical groups in the area, including the Spokane Symphony. He founded and was the first director of the Coeur d’Alene Symphony, the Panhandle Symphony and the Community Concert Band. In 2012 Robert became the Director of Programs and Marketing for the Museum of North Idaho.