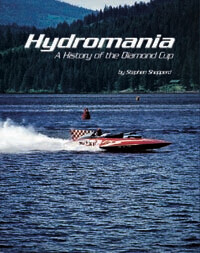 Hydromania - A History of the Diamond Cup

Coeur d’Alene’s love/hate relationship with boat racing is at the center of this comprehensive history of the Diamond Cup race for unlimited hydroplanes. The early origins of competitive boat racing on Coeur d’Alene Lake, the backstory of the how the small lakeside community came to host ten years of the Diamond Cup, the true story of the civil disturbances that would cast a lasting pall on the event, the real reasons behind the decision to stop hosting the races, and the drama and controversy that led to the races being banned from the city are all covered in depth. The stories of the civic leaders, race volunteers, boat owners, drivers, and other key individuals that came together to put on the exciting spectacle that was the Diamond Cup are lovingly recounted. Of interest to boat racing fans and those curious about one of the premier sporting events in the history of North Idaho. Illustrated with over 100 photographs.

In the minutes following the accident, I returned to the pit area sea wall, and watched as they transferred Slovak from the rescue craft to the ambulance. The complete transfer from the time of the accident until Slovak was in the ambulance took an estimated six minutes and seventeen seconds.

From interviews given by Col. Gardner after the accident, we can get a relatively clear idea of the situation that he encountered when he dove from the deck of Notre Dame to save his friend.

“I was running in the slot behind Mira and Exide as we passed the barge. Exide was near the middle of the chute. As we neared the turn, Bill Muncey and Miss Thriftway rushed by on the outside. It was just as if Exide fell into a hole. I cut my mixture control and jumped into the water. I thought I had slowed, but I sure bounced a few times.”

Gardner jumped into the water and swam the twenty feet from his boat to the wreckage and Slovak. He took no time to remove his boots, helmet, or driving suit. Also arriving on the scene was Bob Schroeder and the Tempo.

“It was just like the Seattle Too accident – exactly,” Gardner continued. “At first, all I could see was the debris. Then I spotted the Exide’s checker tail under the water, and saw Slovak floating next to it. Fortunately, the water is clear, and I spotted his yellowish lifejacket.”

“I went in after him. He was flopping around, trying to get his face out of the water. He was unconscious when I reached him. His head was laying to the right on the collar of his life jacket. He was bleeding badly from a cut just under his lower lip, so I held him up until the boat came.

“Before the patrol boat got there,” Gardner said, “Mira began fumbling for me. I thought at the time that he must have injured his right arm because he kept trying to turn to the left and grabbed out with his left hand.”

“I just tried to keep his head out of the water until the patrol boat arrived.”

Slovak was reportedly mumbling incoherently as he was taken from the boat and placed in the ambulance at the foot of the Third Street boat launch incline. Slovak was rushed from there to the nearby Lake City General Hospital where Dr. Bud Barclay and Dr. Randy Pillow examined and treated him. Pillow was from Seattle and was the medical officer of Unlimited Racing Commission.

Stephen Shepperd was born in Springfield, Massachusetts, but his roots are deeply planted in North Idaho and Coeur d’Alene. His family homesteaded in the Idaho Territory, and members of his family have lived in the Coeur d’Alene area for nearly a century. He graduated from Coeur d’Alene High School and North Idaho (Junior) College on his way to earning a B.S. degree in History, an M.A. in Teaching, and an M.Ed. in School Administration from the University of Idaho. A retired teacher and principal, he worked the majority of his career in the Kellogg, Idaho school district, earning the honor of Idaho’s Elementary Principal of the Year in 2001. Stephen and his wife, Cedris, live in Kellogg and enjoy following the sporting exploits of their two grandchildren.

It is obvious that Stephen has a passion for hydroplane racing as it shows in the detail that comes out in this book. If I could close my eyes and read at the same time I could picture vividly the racing action that he has captured in the way he writes. As a young boy I was at the 1964 and 1965 Diamond Cup watching my dad and other boyhood heroes. As young as I was Stephen has in detail brought back a lot of fond memories. A lot of good books have been written about hydroplane racing in the past few years but in my opinion none have captured the fine details like Stephen has. THANK YOU very much Stephen!

Illustrations
Acknowledgements xii
Prologue - The Very Early Days
Chapter 1 - How It All Began
Chapter 2 - Let’s Get The Boats Wet
Chapter 3 - Race Weekend At Last
Chapter 4 - Planning to Succeed
Chapter 5 - Implementing the Plan
Chapter 6 - Attrition and Survival of the Fittest
Chapter 7 - The Bardahl Controversy and the Recovery of Jack Regas
Chapter 8 - The Winds of Change Begin To Blow From The East
Chapter 9 - The Third Time Is A Charm
Chapter 10 - Show Me the Money (or Else)
Chapter 11 - We’re Mad as Hell and We Aren’t Going to Take It Anymore
Chapter 12 - Moving Ahead With Gusto
Chapter 13 - Going Pro
Chapter 14 - Life Begins Without Miss Thriftway
Chapter 15 - If They Were Using Laughing Gas, Why Are You So Glum?
Chapter 16 - Don’t Fence Me Out
Chapter 17 - Facing the New Challenges
Chapter 18 - Against All Odds, It’s Race Time
Chapter 19 - Something Is Happening Here, What It Is Ain’t Exactly Clear
Chapter 20 - A Hot Wind Blows
Chapter 21 - Turn Out The Lights on the CUHA...An Era Ends
Chapter 22 - Let’s Do It Just One More Time
Chapter 23 - A Long Day Into Night
Chapter 24 - Could It Really Be Over?
Chapter 25 - Folding The Tents
Chapter 26 - Leaving The Door Open
Chapter 27 - From the Sports Page to Op Ed
Chapter 28 - Thou Art Banished
Chapter 29 - A Hard Wind Blowing
Chapter 30 - Speaking Through The Ballot Box
Chapter 31 - Standing On The Corner
Postscript
Bibliography and Sources of Information
Index