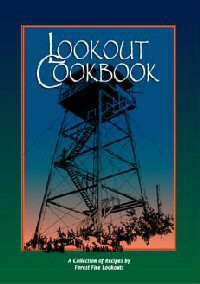 Lookout Cookbook - A Collection of Recipes by Forest Fire Lookouts

The Lookout Cookbook is a blend of recipes, history, personal stories and over 100 photographs. Seventy recipes from breakfast to dessert were collected from the people who have staffed or still staff fire lookouts. This book provides a glimpse into what it was like to spend a summer isolated in a lookout. The Lookout Cookbook raises awareness of these historic structures and their preservation.

Blend all together. Pour into hot, greased skillet and bake 20-30 minutes in moderate oven. Chopped, crisp bacon, cooked ham, or cheese may be used in omelet.

"Summer usually ends with a bang on a lookout. The end of August brings the Fall Equinox and a challenge to your courage. Tales of direct hits by lightning on lookouts are in the back of your mind. Mid-August 1941, on Fir Mountain, brought the worst storm I was to experience. I saw at least 10 smokes on the adjoining ridge, my telephone went down, rocks sprayed the station. The storm was under me, over me, and deafening--lightning almost constant and terrifyng. Mt. Annie and I got it about the same. Ralph Brashears and I should have been awarded Silver Stars for surviving that one! Floyd Cory gave me 7 days off instead. I was 20 years old, and was most impressed with the fury of the mountain.

St. Elmo's fire is a phenomenon peculiar to towers with lightning rods. A lookout tower is equipped with an assortment of cables; the individual wires are fanned out on the point of the roof, and they are drilled into the rocks at the base of the tower and cemented in place. They are designed to ground a direct hit from lightning, and probably work most of the time. But when a storm cloud approaches, these cables turn a bluish-white neon color. They definitely glow. It is particularly disturbing at night, when you are awakened by a thunderclap. This one storm hung around for 6 to 7 hours and old St. Elmo practically wore those cables out!" -- Dave Slagle

Libby Langston's first experience at a lookout tower involved hiking nine miles to the top of a peak on the Clearwater National Forest in Idaho to visit a friend who had escaped the city to be a lookout. Upon her approach to the tower, the lookout waved to Libby from the catwalk outside her cozy little summer home on its very tall legs. After Libby climbed the four flights of steps to the cabin, she greeted her with bread she had baked that morning. Because of this unforgettable trip in 1985, Libby has been drawn to lookouts. Over time she visited friends working lookouts, occasionally filled in for a lookout and often rented lookouts. Libby's love for lookouts drove her to create a book that would honor the people who are lookouts and foster appreciation for the structures themselves. Her hope is that The Lookout Cookbook will raise awareness of these historic structures and help raise money to restore more lookouts throughout the United States. Libby Langston holds a Bachelor's Degree in Journalism from the University of Georgia and a Master's Degree in Journalism from the University of Montana. She has lived in Missoula, Montana since 1982 and has been the Fire Education and Videographer Specialist on the Lolo National Forest since 1986.

Gary A. Weber Fire Management, IPNF-Priest Lake This is not just a "cookbook"! This brings together the lookout staffers, their stations, and their creativity - in satisfying their taste buds as well as in expressing themselves, whether through artwork, poetry, or simple quotes. A great showing of another facet of life on a lookout!

Jill Osborn Archeologist, National Coordinator, Passport in Time Libby Langston has done a masterful job combining two of my favorite things; fire lookouts and food. Preserving the lookouts and the stories of the individuals who serve in them is central to what the Forest Service stands for. The Lookout Cookbook is an artful blend of recipes, history, personal stories, and courses of action for continued preservation of forest fire lookouts. Bravo!

Keith A. Argow, Chairman of the Board Forest Fire Lookout AssociationBack when lookouts first went into service in the west in the first half of the 1900s, they were often staffed by young men still living at home. Since these were remote mountaintop locations, there was no "going home to Mom" for a good meal, so these fellows had to fend for themselves! While the U.S. Forest Service developed simple recipes in an invaluable cookbook that remains a classic to this day, the recipes here have been collected from the lookouts themselves!

Ray Kresek Author of Fire Lookouts of the Northwest A long overdue work after years of research, compiling many interesting recipes and anecdotes of those who served in a rather unique lifestyle on America's backcountry fire lookouts!