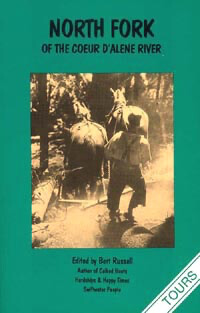 North Fork is a collection of tape-recorded and edited interviews with homesteaders, railroader, and others. Itâs all here as they told it: the dangers of logging, the raunchy stories by which the river drivers defused the bite of ice water and forgot straining muscles; the origin of names like Dolly Falls, Deadmans Eddy and Lovers Leap. What itâs like to dive into one of the steamholes of Pond Peak and travel a country of fish-eating snakes; to joyride a borrowed railroad speeder and meet another head-on in the dark. The fear that gripped Enaville during the Maki killings. The festive days of the Sunday Fish Train. A family picnic where the mothers got soused. The man who required an otter skin to keep his do-do from freezing. And one who said, "When I got a vasectomy they damn near drummed me out of the clan." From before 1910 to 1945. Also Do-It-Yourself Tours of where things happened.

Together, Bert and Marie Russell collected interviews, information and photos from old-timers over many years. North Fork is one of six books produced by the couple. Calked Boots, Hardships and Happy Times, Swifwater People, The Sawdust Dream and Rock Burst all reflect the lives of working men and women in the Coeur d'Alene region.

Bert was born in Harrison, Idaho and worked as a logger, river driver, shipyard electrician, timber cruiser, rancher and writer. Bert passed away in 1997. Marie continued to keep the stories told by these pioneers alive by making the books available to the public. Marie donated the books she had on hand to the Museum of North Idaho. Marie died Dec. 2014.

The Museum of North Idaho reprinted North Fork in 2003