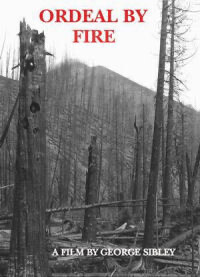 Ordeal By Fire - A Film By George Sibley

The history of the Northwest is inseparable from the history of fires in the Northwest, and the fires of 1910 are legendary here. Ordeal by Fire brings to life one of the most exciting periods of American history, a time when people of vastly different backgrounds -- Italian and Irish immigrants, Black soldiers, prospectors, loggers, forest rangers, farmers and railroad men -- were learning to live both with each other and with the ancient natural cycles of a harsh yet beautiful land. The fires were also the first big test of one of American's most profound political ideas: could, and should, the federal government manage and protect America's natural resources? For better and for worse, these fires shaped how Americans would view wild land fires and fire protection, and its impacts on our landscapes and on how we mange our lands are with us to this day.

Bonus features include After the Fire and Remembering

About The Filmmaker - George Subley
George Sibley has been a filmmaker for more than 40 years, mostly making educational films and documentaries. Based in Florida, he is fond of telling lesser-known stories of American history to wider audiences.

In 2001 he started Gale Force Films to help increase the use of video programs by nonprofit groups. Much of the company's earliest work focused on environmental issues for clients including the Sierra Club, Scenic Virginia, the Piedmont Environmental Council, Floridians for Environmental Accountability and Reform (FEAR), the County of Volusia (Florida), Floridians for a Sustainable Population, the Alberta Wilderness Society, and the Southeast Volusia Historical Society.

His films have been widely used in "anti-sprawl" land use campaigns all over Florida and in several other states and provinces, and three of his Florida conservation films ("Six Fairy Tales About Growth in Florida," "Changing Lanes," and "Phantom Future") were shown nationally on the DISH network's satellite channel "Free Speech TV" in May and June of 2005. In June of 2006 his film "Lewis and Clark and US" was broadcast on Montana Public Television.

The following year George turned to more history-oriented work by making "Smyrnea Lost and Found", about the origins of what became the Florida town of New Smyrna Beach. That film involved soma extensive overseas filming as well as work with historic reenactors in Florida and Georgia, and is now in residence at the local historical society museum. The film was selected "Outstanding Achievement in Educational Media" for 2007 by the Florida Trust for Historic Preservation.

In 2009 Sibley's film "Shadows of David Thompson" was widely shown in cities across Canada and the U.S. as part of the 200th anniversary of Thompson's most important explorations. Since Thompson established the first European posts in what is now Idaho and western Montana, several Historical Societies and museums in North Idaho were among those who showed the film. Montana Public Television also aired the program.