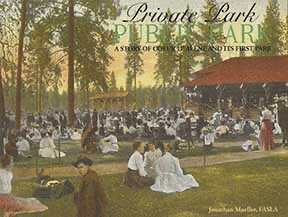 It was an exciting time for the place once known as Coeur d’Alene City. Resolution of the sale of Fort Sherman had been achieved. A very natural waterfront had been transformed into a complex of industrial and transportation concerns with wharves, docks and rail spurs. New hotels had been constructed. Coeur d’Alene’s main street, Sherman Avenue, had emerged as a regional commercial center with brick masonry buildings and electric lights.

The politicians announced a 20-acre gift of land from the federal government to be used as a lakefront park. An additional 20 acres was also given as a municipal cemetery with frontage on the newly established Government Way. The successful completion of a separate initiative on the part of private entrepreneurs also was announced that brought the first commuter/tourist rail to Coeur d’Alene from Spokane. The Coeur d’Alene terminus of these new facilities was a 20-acre parcel of land adjacent to the newly dedicated park parcel. This tract of land would be privately developed into additional public parkland and depot grounds in support of the rail line.

This is the story of the creation of Coeur d’Alene’s first park and one of the oldest in the State of Idaho. Its origins are found in the will of determined local people and newly arrived captains of industry. Its frame of reference is not only intertwined with and a part of the state and local history of the time, but also with the national movements of the era. Welcome to Blackwell Park, as it was initially known, and understand how it came to be and how it eventually became to be known as Coeur d’Alene’s City Park.

1936-1945
This next time-period of ten years brought forth the greatest change since the fort closed and the park was initially built. It also saw the end of the lake boat era on Lake Coeur d'Alene. As previously noted, late in 1935 plans were finalized for a new public auditorium to be built at the Pavilion location. It was approximately 138 feet by 136 feet, and seated 2,000 people on the main floor. Another 1,800 had bleacher seating. The facility was heated, and a fully functional community gathering place. It was built through the Works Project Administration, a Depression-era jobs program, where local materials were a match for federal government payment of labor and project management costs. In this case, local larch and cedar logs were used to build what at the time was one of the largest log structures in the Pacific Northwest. Work began in the spring of 1936, but was not completed until 1938. The facility became the community gathering place and was also used by North Idaho College for both student and athletic events.

Railroad usage and profitability continued to be challenged as changes in the transportation sector along with shifting allegiances continued to accelerate in America. The business community also searched for new ideas to bring tourists to town as waterfront boating just wasn't enough of a draw. After a series of negotiations with the Great Northern Railway, the city acquired the rights, within the context of federal railroad law, to the G.N.R. depot site formerly known as the electric dock. The city then transferred the rights to Earl Somers and the Coeur d'Alene Development Company in late 1940 through a 15-year lease with an option for a 10-year extension. Somers began a massive earthwork and ballast importation project in 1941, placing some 20,000 cubic yards of material to build a large pier. His company intended to construct an amusement park as a tourist attraction.

Jonathan Mueller, FASLA, PLA, is a landscape architect with over 35 years of experience and a background in park and recreation planning and design. His list of completed works includes projects in seven western states.

A native of Coeur d’Alene, Idaho, Jon also has an interest in both history and governmental affairs. The blending of these two intellectual pursuits along with his background as a landscape architect has made the telling of the story of Blackwell/City Park a passion for him, especially when framed in the larger context of national historical events and movements of the times. Jon also enjoys photography as a leisure pursuit and understands the power of images in story-telling. He brings this unique perspective to story-telling and emphasizes that the best stories are told in both words and images.

Jon is a past national president of the American Society of Landscape Architects (ASLA). He was elected to ASLA’s prestigious Council of Fellows in 2007, and a recipient of the ASLA President’s Medal in 2015. He currently is licensed as a professional landscape architect (PLA) in five western states and is fortunate to call Coeur d’Alene his home.

Private Park Public Park is an engaging and informative exploration of Coeur d'Alene and its iconic city park. From geological origins through modern day iterations, the author illuminates the personalities, politics and physical characteristics that have contributed to making this region the aesthetically beautiful, indeed “spiritual” place that it is. Jonathan Mueller’s background as a landscape architect makes him uniquely qualified to tell this story. His clear, concise writing style and the accompanying archival drawings and photos allow the reader to “participate” in the historical activities culminating in the formation of one of our most treasured public spaces. I highly recommend this book to anyone wanting to expand their knowledge of this unique and special place we are lucky enough to call home!
Ruth Pratt, Ph.D.
Former Director of the Coeur d'Alene Public Library Foundations

Private Park Public Park is a thoroughly entertaining study of an important aspect of Coeur d'Alene’s history. The material is well-organized and clearly expressed without extraneous detail. The extensive photographs are not just supplemental to the text, but essential to it. This is a beautiful and highly entertaining book. F.A. Blackwell likely would have appreciated it very much.
Fritz Blackwell, Great-grandson of F.A. Blackwell