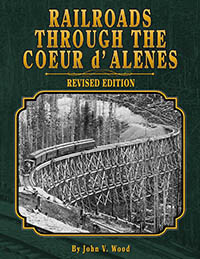 Railroads Through the Coeur d'Alenes

This revised edition includes the history of the last Burlington Northern train that traveled the old NP Coeur d’Alene Branch culminating in its abandonment and the end of Union Pacific Railroad service to the Coeur d’Alene Mining Area. The book features a new layout and over 400 photographs. Images are accompanied with first-hand accounts of early day residents, illustrations and maps that speak far more eloquently than any text could. Many never before published photographs include the work of well-known rail photographers Warren McGee, Phil Hastings, F. J. Haynes, Ron Nixon, Otto Perry, and Don Roberts – as well as over 100 photographs from the Barnard-Stockbridge Collection (Barnard Studio of Wallace, Idaho). Many of these new images produced from the original 8 x 10 glass plate negatives.

While the term “pictorial history” is very appropriate, it must also be stressed that the carefully researched text provides a definitive history of the railroads in the Coeur d’Alenes. This revised edition not only updates the original by adding the sad note of the last railroad, Union Pacific, leaving the area; but it also adds a wealth of photographs the author collected in the years following the first edition. Readers will delight in the bonus images, which are an improvement over those used in the original edition. Whatever the future might hold for the Coeur d’Alene mines, the glories of its past that railroads made possible are secure; and those who love to look back upon those times will delight in reading Railroads Through the Coeur d’Alenes.

But more important than the transportation routes from Coeur d’Alene City (in terms of supplying Eagle, Murray and Burke) were the connections with Thompson Falls in Montana Territory. While the NP first stopped at Belknap and advertised it as the jumping off point for the Coeur d’Alenes, the citizens of Thompson Falls forced trains to stop at their town and convinced the miners and the railroad they had a deserving community. An old Indian trail connecting Thompson Falls and the Mining Area became the basis for Thompson Falls Trail. The trail began at Thompson Falls and followed Prospect Creek for miles, swung right to cross Thompson Pass at an elevation of 4,859 feet, then dropped down to Murray and Eagle. Another route left Prospect Creek and swung left over Glidden Pass at an elevation of 5,768 feet, then descended to Burke. Until the railroad arrived, this was the main traffic route to and from Burke, since the much shorter distance to Wallace did not get a wagon road until after the railroad had been completed! The Thompson Falls Trail was soon converted to a rough wagon road – taxes were levied in March 1885, to build the road from Thompson Falls to the Idaho border. In addition to the Thompson Falls Trail, the less-used Belknap and Trout Creek trails also crossed into Montana to connect with the railroad.

Traveling the Thompson Falls Road in 1887 was a dangerous business. On August 5th E.J. Catleff, a freighter headed for Thompson Falls, was relieved at gunpoint of $135 by three men on Glidden Summit. The men were never caught. On August 14th three other men were robbed by a lone gunman between Murray and Thompson Falls. John Hachett lost $500, a watch and a gold ring. C.W. O’Neill lost $40, a gold watch and $2,000 belonging to the Bank of Murray. Although a large reward was offered, this crime was never solved.

In addition to the threat of bandits, travel on these early roads was marked by narrow escapes from forest fires and runaway wagons. It is no wonder mine owners sought a safer, cheaper method of transportation.

Author John Wood was raised in Coeur d’Alene, Idaho, the town where his first ancestor arrived in 1889. He was raised in a family that steeped in him a love of history—especially the history of North Idaho. His family frequently took Sunday drives visiting its different areas, and one that stood out was the Coeur d’Alene Mining District. The huge jumbles of mining structures that formed the complex of the Morning Mine Concentrator just west of Mullan and those of the Hecla at Burke made a lasting impression. His love of railroads also began in childhood with Lionel model train sets and the sights and sounds of the huge Northern Pacific locomotives on the mainline crossing the Rathdrum Prairie.

After graduating from high school in Coeur d’Alene, John attended the University of Idaho where he earned a B.S. degree in 1968. He also met his future wife there, and the couple married after his graduation and moved to his first teaching position in Corvallis, Oregon. While in Corvallis, he worked on his M.S. degree which he achieved in 1973. Soon after this, a chance encounter with a photograph of a narrow gauge train at Wallace started him on a long journey of historical research and writing.

In addition to writing Railroads Through the Coeur d’Alenes, he has written numerous articles on the history of the area, and he has been asked to speak at a number of locations in the Inland Empire and Oregon, mostly on various aspects of railroad history. In 1983, he started researching and writing about steamboats on Lake Coeur d’Alene. This work is nearly complete and the Museum of North Idaho will publish the book.

John Wood has done great service to the rail-heritage community by updating his 1983 classic tutorial on railroad operations in the Coeur d’Alene mining districts. His book’s absorbing text tells incredible stories of railroading with heavy loads on steep grades in often challenging environments. Railroads Through the Coeur d’Alenes is richly illustrated by significantly more photos with informative captions. His persistent research makes this book is a joy to read and even study.
Thank you
Gary Tarbox, Executive Director Pacific Northwest Railroad Archive

The wonderful first edition left us hanging for the rest of the story. Wood delivers in this upgrade with many more great photos and the final page on railroading through the Coeur d’Alene.
A must have for every railroad buff and aficionado of one of the greatest mining districts on earth.
Earl H. Bennett, Idaho State Geologist (retired)

Railroads Through the Coeur d’Alenes is the finest history of railroad and transportation history ever written about the Coeur d’Alene Mining District. John covers the major railroad interests as well as the local railroad builders. The history of railroads and mining development go hand in hand.
Thank you John for printing a second, enhanced edition.
Shauna Hillman, Director Northern Pacific Railroad Depot Museum

Having been born and raised in Wallace, ID, I grew up in a family that collected most books about the history of the Coeur d’Alene Mining District. When I acquired the first edition of Railroads Through the Coeur d’Alenes by John Wood, it became my "go to" reference for much more than its railroad focus. He presented a book covering both the breadth and depth of the evolution of this mining area by focusing on the critical role railroads played in the region. My love for transportation had created many memories of Wallace, which John has rekindled with the new pictures of trains and people. This revised edition builds on the historical relevance of his earlier book and with a new layout John Wood has now created "The Best of the Best" for anyone interested in the history of the Coeur d’Alene Mining District.