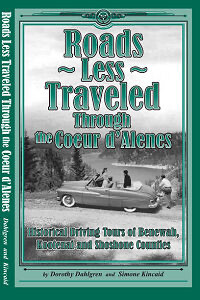 Eight tours of historical sites in Kootenai, Benewah and Shoshone counties. The book includes facts and human-interest stories creating a fascinating story of the Coeur d'Alene Region. Complete with maps, index, tour segment distances and estimated times of each tour.

Tour Three: Coeur d'Alene
This tour of Coeur d'Alene is about 9.5 miles and takes less than an hour.
At the intersection of Government Way and Dalton Ave. turn left (south).
The French name Coeur d'Alene can be traced back to the early 1800s when David Thompson, of the North West Fur Trading Company, encountered French speaking Iroquois Indians already living here. Since the Iroquois were familiar with the area, he hired them for guides and scouts. The words Coeur d'Alene (heart of awl) may have been the Iroquois' attempt to describe the sharp trading practices of the local Indians who called themselves Schee-Chu-Umsh. An awl is a pointed tool used to pierce leather.
With the establishment of Fort Coeur d'Alene in 1878, Coeur d'Alene City developed near the edge of the fort and within a few years, it became a supply point and navigation hub for the mining and timber industry. Coeur d'Alene's importance as Kootenai County's center was reinforced when voters moved the county seat to Coeur d'Alene in 1908. By 1910 the population was 8,000, with six large lumber mills in or near Coeur d'Alene, four banks, five hotels, nine churches, four grade schools and a high school, a movie theater and two telephone systems. Four railroads served the city, the Northern Pacific, Coeur d'Alene & Spokane electric line, the Milwaukee and the Spokane International. Coeur d'Alene's major industries were timber, tourism and agriculture.

Kootenai County Fairgrounds
Kathleen Ave. and Government Way, NE corner
About 1920 this site became the first municipally owned airport in the U.S. Weeks Field attracted hundreds of spectators to stunt flying, air derby, and parachuting events. During WWII, Gwin Hicks, and Herb and Gladys Buroker leased the airport to train pilots for the war, teaching over 400 students to fly. The large building along Government Way was built as a hangar during the war. In 1953 Weeks Field became the fairgrounds and the county built the grandstand in 1958.

The Schrieber Barn
On the hill to the left (south)
Although the barn was built in the last 60 years, the homesteading of this land goes back to 1897. This barn was part of a 160-acre dairy operation, owned or leased by several people over the years. As late as the 1970s Paul Zayer and his family sold milk by the gallon jar, which included several inches of cream on the top, for one dollar.

Go left (south) at Ramsey Rd. Once over the freeway, it becomes
Northwest Blvd.

Gibbs
Near Northwest Blvd. and Lakewood Dr.
The area from here south to the overpass was established about 1903. Known as Gibbs it takes its name from one of the partners of the Stack-Gibbs Lumber Company. Gibbs was dependent on a succession of lumber companies that occupied the strip of land between the Spokane River and Northwest Blvd. The Winton Lumber Company operated the mill from 1918 to 1946. Northwest Timber Company bought the mill and operated it until it was removed in 1990.

Continue about 2 miles and turn right at Lincoln Way. There is a
railroad crossing sign just before the turn, which only goes right. Then turn right at River Ave.

Fort Grounds Tavern
705 W. River Ave.
Built in 1908 the building housed a drugstore and confectionery. Wyatt and Ruth Gray opened Gray's Grocery in the early 1940s. They added the west half to the building in 1959 for the grocery business and moved the tavern, run by Red Gray, to the east half. The grocery store closed and a kitchen was added in 1980. The Fort Grounds Tavern remained in the Gray Family until 2006.

DeArmond Stud Mill
River Ave., on the right
This mill makes lumber for frame construction. The building on the right, seen often with steam coming out of it, is the dry kiln, which was built in 1960. Logs arrive at the mill at the Spokane River waterfront and by truck. The majority of lumber goes out by rail on the Burlington Northern Santa Fe and the remainder by truck. The mill will close in 2008.

701 W. Lake Shore Dr.
Mr. Olsen built this home in 1914 at 4th and Harrison for logging contractor J.M. Carey. In 1955 the house, built with virgin pine, was moved to its present location for Burl Hagadone, publisher of the Coeur d'Alene Press.

613 W. Lake Shore Dr.
Anna Laurie Nevers built this home in 1907 and sold it to Mr. and Mrs. Eric Bjorklund in 1909. He owned IXL Clothing Store on Sherman Ave. for about 45 years and liked to be called "By Jork." The Edward Rutledge Timber Company (Potlatch Forest) purchased the house in 1927. In 1930 the Clarence O. Graue family moved into the house when he was purchasing agent for Rutledge Timber Company. He also served as president of the Red Collar Line. In 1932 he became general manager of Potlatch Forests, Inc. Clarence's wife Lulu established the first chapter of the American Association of University Women in Coeur d'Alene. Upon his retirement, the company gave him the house. The Graue family resided there until the mid-1970s. It was remodeled and the wrap-around porches were enclosed.

607 W. Lake Shore Dr.
Judge James Beatty built this house in 1910. James Evenden, chief entomologist for the U.S. Bureau of Entomology, Dept. of Agriculture, bought the house in 1933. His wife Ella was instrumental in building the Camp Fire Girls program in Kootenai County.

205 Park Dr.
Charles Craik built this home between 1908-09. In the late 1910s J.W. and Grace Vollmeck moved into the home. By the 1930s he was the district manager for the Washington Water Power Company. Forrest Schini married Arlene Tendall, whose family home was just around the corner, and bought this house in the late 1930s. Forrest practiced dentistry in Coeur d'Alene for 36 years. His son Robert practiced for 35 years and his son took over the practice continuing to treat some of Forrest's patients. Schini's lived in the house until 1957 when Dr. Gedney Barclay's family purchased it. The Barclays lived here until 1991.

207 Park Dr.
During the 1920s the Fort Grounds neighborhood was home to several young mill managers raising their families. David and Katherine (Kay) Winton moved into this 1910 house in about 1920. David's brother Charles and his wife Henrietta also lived on Park Dr. They co-owned the Winton Lumber Company with Walter Rosenberry. David and Kay often socialized with Phil and Helen Weyerhaeuser who lived at 319 Park Dr. For almost a half-century it was the home of Capt. John and Thelma Finney. He ran the tour boats Seeweewana and Dancewana on the lake until retirement in 1984. Capt. Finney is credited with inventing water skiing. Finney's daughter extensively remodeled the house in 1997. A stained glass window depicts the original architecture.

Harry and Orene Knight built the house in 1907 and in March of 1911 died within 14 hours of each other. Mr. Knight, a successful attorney in the partnership of Gray & Knight, had been ill for several months, having contracted blood poisoning from a sliver beneath his skin. Upon the sudden death of his wife from ptomaine poisoning from eating peas, Mr. Knight died. After years of vacancy and renting, the house was in a state of disrepair when D.D. and Blanche Drennan bought it in 1918. John and Florence Shelton purchased the house in 1935. Their daughter, Susan Schrieber, and family moved into the home after Florence's death. The house was remodeled in 1952, 1980 and again in 1995.

Dorothy Dahlgren is the Director of the Museum of North Idaho and Simone Kincaid is the Assistant Book Manager for Hastings. Both have worked for or volunteered for the Museum for over 25 years. In reality there were many authors. Over 80 volunteers and historical groups in the region helped made this publication possible.

What a great resource! This well-researched, well-organized and well-written guide is an adventure back into history while driving through North Idaho counties. Complete with maps, tour segment distances and estimated times of each tour, the book is full of interesting facts and antidotes. Reading it made me want to get out and explore!
Mike Kincaid
Correspondent, Spokesman Review Outdoor Adventures
Magazine writer
Author of Jack Blake, Alaska Bush Trooper

As I grew up in Coeur d'Alene in the early 1950s one of my greatest pleasures was taking a Sunday drive with my grandparents, Dr. and Mrs. John T. Wood. Having lived in Coeur d'Alene since about the turn of the century (the one in 1900), they had great stories to tell at nearly every turn of the road. Well, they are no longer here, but you can have the same wonderful entertainment - not to mention education - while you drive with this guide. It's the next best thing to knowledgeable grandparents!
John Wood

author of Railroads Through the Coeur d'Alenes