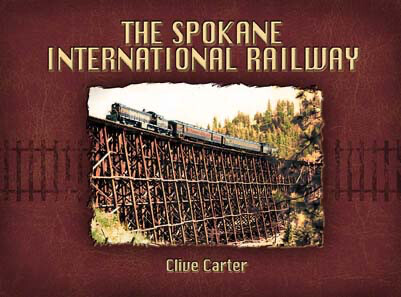 The 141-mile branch line between Spokane, Washington and the International Border with Canada provides a rare success story. The line that was once the Spokane International now carries close to ten times more tonnage annually than it did fifty years ago. From an enthusiast’s viewpoint, the line has provided a catholic selection of motive power, together with passenger train service during its first half-century, and a variety of freight traffic operating over a demanding route. A thorough history of this century-old system and its modernization are presented herein, filling a gap in railroad writing.

The Spokane International Railway was built to provide a connection between Spokane, Washington and Canada. After several owners the 140-mile line developed into a significant carrier of trans-border traffic. Close to fifteen million tons are now carried annually, much of the traffic heading to Pacific Coast ports. The line has received limited attention in railroad publications. History of the century-old system and its modernization are described herein.

At the start of the twentieth century, Spokane, with a population of 20,000, had established itself as the preeminent city in the eastern half of Washington state. The city was already served by three trans-continental railroads. The Northern Pacific Railway main line between St. Paul and Tacoma had opened in 1887. Several years later, Great Northern Railway’s construction crews arrived in Spokane on their way from St. Paul to Seattle. Oregon Railway & Navigation, a Union Pacific Railroad ancillary company, entered Spokane in 1889, giving connection to the UP Overland main line, albeit over a somewhat convoluted route.

Despite the apparent benefit of having competitive railroads in Spokane, the freight rate structure was of ongoing concern to shopkeepers and businesses. The basic problem was that it was generally cheaper to ship from the eastern half of the USA to Seattle, or Portland, than over the shorter distance to Spokane and Inland Empire towns. Competition from shipping lines had driven the rates down at the Pacific ports.

Consequently, a potential railroad from Spokane to connect with the Canadian Pacific Railway raised hopes for lower rates - Canadian railways were not subject to control by the Interstate Commerce Commission which dictated the US tariffs. A Canadian Pacific subsidiary, the Minneapolis, St. Paul & Sault Ste. Marie Railroad (the Soo Line), served U.S. cities through its border connection with the CP at Portal ND. Such a newcomer would give the Oregon Railway & Navigation and the projected electric Spokane & Inland Empire system direct access to Canada and to U.S. cities already reached by their competitors. Distance from Spokane to the twin cities of Minneapolis/St. Paul over such a route was close to 1500 miles, essentially the same as offered by the existing railroads. This “bridge” function of a connecting line was the primary attraction for investors to fund its construction.

In addition, there was some potential for generating on-road traffic. Fruit growing was expanding near Spokane and the lumber industry developing rapidly in the Idaho Panhandle. Population between Spokane and the International Border was sparse, but the towns of Sandpoint and Bonners Ferry were growing with the lumber industry and the benefit of Great Northern and Northern Pacific main lines services. On the southern British Columbia side of the border, local activity by a US railroad was generally welcomed there as it usually precipitated action by the CP.

While the above were pragmatic factors at the local level, class 1 railroads and their leaders naturally became influential in any commitment to a go-ahead for the new line. Railroads already serving Spokane did not want a new competitor. Over the border, the Canadian Pacific Railway had built the transcontinental line from Toronto to Vancouver BC. To serve southern British Columbia and the expanding mining area in the Kootenay region of the Rock Mountains the CP had completed a line over Crows Nest Pass in 1898 to Kootenay Landing (some 30 miles east of Nelson). This was the nearest Canadian owned line to Spokane that gave access to the eastern half of North America. Canadian Pacific, already burdened by the cost of constructing the main line, had managed to persuade the Canadian parliament to subsidize this second line. The resulting Crows Nest Agreement gave CP a generous per mile subsidy, while in return the company was required to reduce certain freight rates and to grant running rights over its new line to other railroads. Eventual extension of the southern line to Vancouver BC was planned by the CP.

James J. Hill, president of the Great Northern, had become one of the directors of the Canadian Pacific during the early 1880s. After failing to persuade the CP board to modify the path of its planned main line, to assist his own expansion to the west, Hill resigned his directorship and fell out with the company. He continued to bear a grudge against the Canadian railway as demonstrated by his later, aggressive, actions in western Canada:

Thus, by 1905 Hill had gained control of much of the coal and coke traffic from the East Kootenays in the Canadian Rocky Mountains as well as the ore traffic in BC. Canadian Pacific, while incensed by Hill’s activities, had not retaliated by building south over the border. Instead, the CP had lobbied the BC and Canadian parliaments to try to stem such activities. Now, the company was running out of patience and ready to take direct action.
Building a connecting line to Spokane, in Hill’s territory, was one way.

The catalyst was Daniel C. Corbin, a Spokane based entrepreneur. He had developed rail lines from Spokane during the previous twenty years, as described in John Fahey’s biography, including the Spokane Falls & Northern Railway system, now owned by Hill. In addition to his primary goal of making money by building a connection from Spokane to the CP, Corbin had reason to seek retribution against Hill who had surreptitiously gained control of the SF&N. Past relations between the CP and Corbin had not been the best. The CP had blocked Corbin’s attempts to enter the town of Nelson BC and organized parliamentary action to prevent him from extending westward. Nevertheless, by 1905 he needed the CP as a partner if he was going to build to the border again. Similarly, the CP decided that despite Corbin’s previous abstraction of “their” traffic in British Columbia, he was an appropriate choice to build a connecting line to Spokane in response to Hill’s invasion.

Clive Carter was born in York, England, a major railroad center, and now the home of the National Railway Museum. With a father employed by the railway, it is not surprising that he became a railroad enthusiast at an early age. He immigrated to the USA in 1966 to work for the Boeing Company in Renton WA. He spent the next thirty years there, becoming a manager in the Engineering Department. Mr. Carter has authored two railway books in the U.K. and a number of magazine articles. His major interests are companies that served the Pacific Northwest. His wife Ann is a physician and they make their home in Bellevue, Washington and Dunoon, Scotland.

The Spokane International Railway was a unique operation organized by one of the smallest of the late 19th Century railroad builders, Daniel Chase Corbin. Like the other empire builders, Corbin believed that his company was solely his business and he kept everyone in the dark, including the government and his backer in the project, Canadian Pacific.

Few records existed before CP opted to take control in the Teens, but what was obvious was that the SIRR had its own way of doing things during each of its operating periods. This drew attention to the little north-south line as it moved from CP control to independent and then to Union Pacific.

Fortunately for us, Clive Carter loves to do research and he unearthed a mass of records that outlines the twists and turns of the Spokane International's history. I think that without Clive's efforts, much of this information would have been lost.