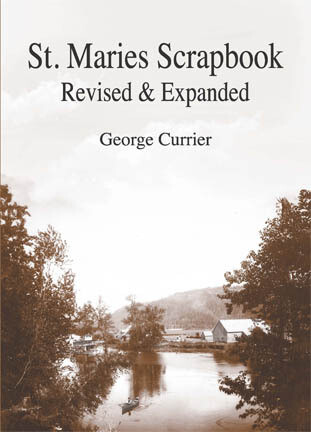 Author: Currier, George
Pages: 160
Type: Paperback
St. Maries, Idaho, located on the St. Joe and St. Maries rivers, could have been another ghost town but the determination of its residents tells a different story. Expanded and revised with an index and photos the St. Maries Scrapbook uses city and county records and personal stories to follow the development of this community.
Excerpt
December 12, 1913. George Mutch died Monday from a lingering heart condition. His wife, Mabel, who gave birth to twins three weeks ago, she caught a cold and then pneumonia shortly thereafter has died from that dread condition on Thursday morning only scant hours after the time that her husband’s funeral services were held. It is hoped that the children, ages three weeks, 4, 10, 14 and 17 years old, can be kept together. Mrs. Mutch was 37 years old at the time of her demise, her husband, George, was but 47 years old.
October 31, 1916. Bootlegging and drunkenness was creating a ‘carnival’ atmosphere but nobody was laughing. First, a logger was arrested for drunkenness on Friday, released on Saturday, jailed again on Sunday for the same thing. He paid his fine, awaiting release and decided to bust up the cell, including breaking the water pipes. Officers found the cell full of water. He spent another night in jail. May 1925, the council gave instructions to hook up the public water trough. The Building Committee again received complaints about old barns being a nuisance because of loud stock, which annoyed the neighbors, plus many of them had very unsanitary conditions. The City Attorney was instructed to notify Welch’s market to remove the chicken coop from the alley. The city payroll for May 1925 was $1,351.40.
Walt Patterson’s ranch often suffered from flooding of the St. Joe River. Walt marked on the farm house kitchen wall all of the high-water marks left from flooding since the 1930s. At least one occasion livestock was moved to the upstairs of the dwelling in order to escape the rising floodwaters.
Author George Currier lived in St. Maries from 1970 until 2006. He presently lives in Lewiston, Idaho. His son, Joseph, still lives in St. Maries. His great grandfather migrated from Kansas and settled near Gray’s Harbor, Washington Territory, in 1886. Many of the family still live in the western part of Washington. He retired from the Washington Air National Guard in November 1993 after serving 34 years total in the Guard and in the U.S. Regular Army in Korea during the war and in the U.S. Air Force. He worked 21 years as an electronic technician for General Telephone in St. Maries, retiring in 1991. He was elected to the St. Maries city council in 1987 and served eleven years until 1998. He served as Benewah County Civil Defense Director for six years at which time he assumed the position of Director for the St. Joe Valley Development Corporation–Timber Plus, a position that he held for four years which included the St. Maries Revitalization construction period between 2000 and 2003.
Contents
About The Author
Acknowledgments
Ones That Were Found Here
The Settlement Grows
St. Maries Town
Paradise on the ‘Joe and Gold on the ‘Maries
The River Steamers Settle In
Paradise Lost to a Fiery Hell
Wobblies, Wars, Wharfs and Woes
Automobiles, Horses and Boathouses
Depressions, Floods and Wars
Facing The Challenges
Index
Save this product for later
Display prices in: USD