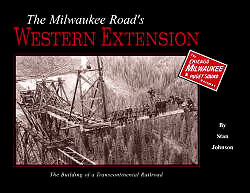 The Milwaukee Road's Western Extension - The Building of a Transcontinental Railroad

The Milwaukee Road's Western Extension is a fascinating story of the 1905-1915 building of the first through rail line between Chicago and Puget Sound. It was a daring decision that resulted in a remarkable accomplishment. It is a tale of unusual human interaction at all levels - full of details about the people and events involved.

It tells of the face-to-face personal and corporate struggle for power by America's railroad barons; the courage and fortitude of pioneering civil engineer surveyors who pushed their way through literally thousands of miles of virgin wilderness in search of a workable route. It looks over the shoulders of hundreds of planners who attacked the unbelievably difficult problems of supplying 10,000 workers strung out over 1800 miles of planned right-of-way, devoid of roads or towns. The reader is taken along and offered the opportunity to observe these laborers as they erect steel trestles three-hundred feet above the forest floor; bore tunnels through almost 20 miles of mountain rock; build new bridges across the Missouri, the Yellowstone, the Columbia and a hundred other rivers and streams while they struggled to stay alive in the face of stifling heat, devastating floods, life-threatening snow and cold, winds of hurricane strength and the presence of typhus that frequented their new route across the Dakotas, Montana, Idaho and Washington.

The reader learns why and how new construction machines came to virgin wilderness for the first time; discovers how the work crews lived; where they played and slept, what they ate, and sometimes how they died. Reading the book is like taking a trip into the beginning of the 20th century when men like Teddy Roosevelt, the Rockefellers, Alva Edison and John Westinghouse were introducing the country to new ways of living and doing business - better medical care, electricity in every day life, and a new freedom - the freedom to travel without pause or discomfort all the way from the beaches of Lake Michigan to the clear waters of Puget Sound.

Based upon details and broad documentation gleaned from the records of the time, the story is one of fact rather than supposition - a broad tribute to the men who built the railroad. It is a saga of great accomplishment and remarkable people.

From the Forward by Michael Sol:
Even as the remnants of that railroad slowly disappear into the earth after the abandonment of the extension in 1980, this author's efforts ensure that the memories of the effort will remain alive: Taft, Montana, and its rowdy saloons; Missouri, Yellowstone and Columbia River bridges; tramways and track laying machines - so many memories, so many wonderful achievements. This book is a symphony of organization and technology set to words describing the building of the last transcontinental railroad.

From Chapter 10: The Eye of the Needle

For the most part, the Milwaukee officials and the Office of the Chief Engineer were quite comfortable with their advance planning and especially their contemplated route. There was, however, one small stretch of the proposed line, a relative short stretch of only about 95 miles, that offered special concern. Not because the construction tasks were especially more difficult than elsewhere, nor because the construction team lacked the necessary materials, equipment, and personnel to accomplish the tasks it demanded, but because it carried with it a bit of a tentative feeling that engendered the unease that comes with wondering if the next moment might bring a particularly and potentially catastrophic surprise. The stretch was in Northwest Montana. It traversed picturesque rolling mountain highlands and beautiful but fearsome, twisting, rock-bound cliffs surrounding a deep rock cul-de-sac known locally as Sixteen Mile Canyon. Potentially it represented a place that could be the end of the Western Extension. It was not the wilderness that worried the Milwaukee planners but the actions of other men.

From Chapter 14: The Proof of the Pudding Is In the Eating

The railroad established a summit camp on some small pieces of rare semi-flat land across the rough road from the head of the lookout trail. A Company man was put in charge of the camp as carpenters began to build some wood framed quarters for engineers at first and later some tramway workers as well. Transient opportunistic entrepreneurs set up some tent stores. Later a large tent and then a wooden building containing a bar, and a small place for playing cards. It offered, in order of preference: liquor, party girls, card playing, and a few sleeping rooms that were let to subcontractor workers - several to a room. The Big Place was named the Summit Bar, and it also housed the ladies of the evening, or canaries, as they were then called. The salon was a popular place with the workers, but the rest of the camp was a necessity for the railroad.

From Chapter 16: Lights At the End of the Tunnel

As soon as it could be accomplished, the newly bored long tunnel between East Portal and Roland was laid end to end with temporary narrow gauge track and a train of cars carrying celebrants from one end to the other began running back and forth. Workers, officials, engineers and a happy group of employee wives and girl friends (on their own special train) became the first to make the joyful, exciting and due to water leaking through the roof, wet trip. In the individual camps there were celebrations too and though the bar and saloon workers. keepers could envision the end of their prosperity in these regions they too were eager to join in, making some extra dollars for the moment, but also sharing in the excitement for it was contagious.

His deep interest in the Milwaukee is understandable since he was born and raised in a Milwaukee Railroad family. His long-time stepfather (since he was 3) was a Conductor on the Milwaukee and served that railroad for 53 years. During the author's youth up through his young adulthood he traveled on trains extensively having made, among others, an estimated three or four dozen cross-country trips from the west coast to Chicago on the Milwaukee's Olympian or Columbian. His traveler's belt is notched from rides on other railroad's trains as well -the Santa Fe Chief, the Zephyr, the Ak-Sar-Ben, the North Coast Limited, the Crescent, the Montrealer, the Ann Rutledge, and "even Amtrak," he says with what could be either a smile or a smirk.

He is knowledgeable about the technical details of railroading and familiar with many of the insider's bits of interesting knowledge about what railroading is really like - especially on The Milwaukee Road. His books have been cited for technical accuracy and a wealth of warm understanding about the people who worked and rode on the trains of yesteryear. Because of this, his files are a storehouse of donated personal tales and anecdotes gleaned from conversations with old "hoggers", baggage men, conductors, brakemen, station agents and even an ex hobo or two. Many of these find their way into his writing and a comment he frequently hears is, "I read your book with interest and enjoyed it very much. Then I read it again and enjoyed it even more, and then I read it again·"

"His latest work is a detailed description of the building of the Milwaukee's transcontinental line from the Midwest to Puget Sound."

". . . a major historical contribution. . . a vehicle for preserving the memories of this remarkable act of human endeavor."

". . . a challenging and demanding subject well-handled with writing that is both informative and interesting."

"He has explored more than the broad focal point of building a new railroad, delving into the lives, personalities, culture and experiences of those who were there and made it happen."

One pre-publication reader summed it up by saying, "I read about those events and as I did I was transported, feeling as though I was really there, an exciting and humbling experience."

Michael Sol, a well known railroad historian writes in his Forward to the book: "Even as the remnants of that railroad slowly disappear into the earth after the abandonment of the extension in 1980, this author's efforts ensure that the memories of the effort will remain alive. . . so many memories, so many wonderful achievements. This book is a symphony of organization and technology set to words describing the building of the last transcontinental railroad. "

In March 1980, as the Milwaukee Railroad strategically retreated from its west coast operation, a company officer was quoted as stating, "We only get one chance to do this, and we have got to get it right." Paradoxically, over seventy years earlier, a different group of company officers who, in a much more positive sense felt similarly, watched with pride as their new railroad expanded westward.

This "new" railroad incorporated the very best in engineering techniques, bold innovations such as electrification, much brand-new equipment, and a proactive marketing department. How did they do it? What choices were available to these entrepreneurs? How were decisions made? What problems did they face, and overcome? What were the daily "nuts and bolts" of this bold undertaking? Respected Milwaukee Railroad author Stan Johnson tells all in this latest narrative. This book is a "must" for anyone wanting to know the comprehensive inside story of construction of the last transcontinental railroad built in the United States.

Forward by Michael Sol
Chapter 1 To Be Or Not to Be
Chapter 2 Breaking the Trail
Chapter 3 A Leap of Faith
Chapter 4 From the Ground Up
Chapter 5 Making A List and Checking It Twice
Chapter 6 Mechanical Wonders and Elbow Grease
Chapter 7 Men to Match the Mountains
Chapter 8 No Place Like Home
Chapter 9 The Family Doctor
Chapter 10 Eye of the Needle
Chapter 11 Wagons West Mobridge to Harlowton
Chapter 12 Lewis and Clark Land Harlowton to Butte
Chapter 13 Nothing Ventured Nothing Gained Butte to St. Paul Pass
Chapter 14 Proof of the Pudding St. Paul Pass to Sorrento
Chapter 15 Water, Water, Everywhere Sorrento to Tacoma
Chapter 16 Lights At the End of the Tunnel
Chapter 17 Unfinished Business
Epilogue
Appendix William Rockefeller to Albert Earling Correspondence
Index
Save this product for later
Display prices in: USD