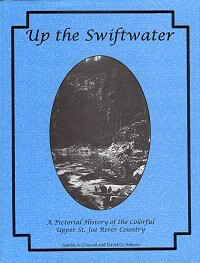 Up the Swiftwater - A Pictorial History of the Colorful Upper St. Joe River Country

High drama, low life and ordinary life in this remote, rugged area of North Idaho are depicted in this colorful history of the upper St. Joe River. The lives of the Coeur dâAlene Indians, miners, homesteaders, and loggers are related in detail. The building of the Milwaukee Railroad and its importance to this area, life in Avery, the horrendous 1910 fire, log drives on the ÎJoe, Civilians Conservation Corps (CCC) projects, Forest Service activities, trapping and wildlife are all covered. Illustrated with 160 historic photographs. Of interest to visitors or those curious about life in the early days in the St. Joe River country.

Trapping and Wildlife
The Hardy Ones

Trappers cannot really be separated from homesteaders, prospectors, packers, Forest Service seasonals, or local residents, for trapping was a source of supplemental income during the winter for nearly everybody. The ones who engaged in trapping were, however, the types who were accustomed to surviving off the resources of the land. Homesteaders Black Joe Faniff, Charlie Hoyt, the Setzer brothers, and Sam "49" Williams all ran traplines. Trapper Jack Allen whose family was part of the Swiss colony downriver, left his name on Allen Ridge, eight miles east of Avery. His partner, with whom he shared the original cabin on Bird Creek, was a man named Jackson of Jacksons Knob. Swiftwater boatmen Archie Lane and Jim Peters of Marble Creek trapped during the winter months, and prospectors Con Faircloth, the Callahans, and Art Lintz added the sale of furs to their income. Bobby Stauffer, who packed, prospected, and occasionally bootlegged, worked at trapping, too, along with Fuzzy Reid (Fuzzy Peak). an iron worker on the railroad and part time saloon-keeper.

The Carlson brothers, Albert, Charlie, Frank, and Oscar, ran traplines south of Avery, and also built numerous study cabins throughout the area. Wash Applegate worked as a lumberjack on Marble Creek in addition to trapping.

Of all the types of people who persisted in taming the St. Joe, trappers had to be about the hardiest. In the winter it was lonely in those woods when snow was sometimes twenty feet deep and the nearest human was two or three days walk away. The trapper who succeeded had to thrive on solitude and use the elements to his advantage. Life was really not very complicated; either you survived or you didn't. Shelter was found in one of the numerous cabins that dotted the country then, or in a small cabin the trapper built himself. If he chose to build his own, he cut down trees with a saw or hand ax and nailed the rough logs together. The structures were so small that the trapper could often light and stoke the fire without getting out of bed, which was a positive advantage on frosty winter mornings!. Each man needed several shelters along his trapline, and sometimes nature provided the best ones. Wash Applegate and his partner William Dunlap trapped along the St. Joe-Clearwater Divide in the 1920's and stayed in a huge hollow cedar tree. This sanctuary was eleven feet across at the bottom, tall enough in the middle for a man to stand, and so quiet that nothing could be heard inside or out. The men installed a five-gallon drum for a stove. At another spot they found protection inside some big rocks where someone had conveniently built a rock hearth. Only at a few of the shelters did the trappers enjoy the luxury of a blanket; mostly they covered up with a bed of dried ferns and boughs, relying all night on the fire for warmth.

In the late fall trappers hired packers out of Avery or Superior to haul their grubstake to their main cabins. Applegate and his partner paid Bobby Stauffer two hundred collars for packing in supplies, cheaper in the long run than the seventy-five dollars charged by another outfit whose string broke up and damaged the supplies. Another sixty dollars paid for the winter's supplies. Food was simple: beans, flour and baking power, sourdough, rice, coffee, spuds, and of course, waterproof matches which were a necessity. Sometimes the trappers ran out of food while making the rounds on their lines, especially if they got caught in a storm. They had no choice but to make the long hungry walk back to camp the next day. Applegate recalls an incident when his partner almost couldn't make those last steps to the cabin because of exposure and exhaustion.

The lines the trappers set up sometimes extended as far as sixty miles. Donning snowshoes or skis, they set out with forty-pound packs full of food, bait and traps. With any luck at all they could anticipate a heavier load on their return trip. The lines ran high up on ridges where pine marten were readily available. Pine marten were prime furs up until the 1950s, bringing in the highest price for the least amount of work. The late Art Lintz told of trapping 38 marten at $22 each in 1938 in the Bluff Creek area, which meant good money in those years. Occasionally the poorer quality rock marten got into the traps, but more often than not, weasels were trapped. Although weasel hides were worth only a dollar, they provided the meal ticket because they were so plentiful. Beaver trapping was illegal in Idaho after the exploitation of that fur-bearer, but that didn't stop one industrious trapper who allegedly packed thirty beaver hides from the St. Joe-Clearwater Divide all the way to Adair. There he loaded them on the train to be sold in Montana.

It took skill and determination to trap otter, a source of fascination to the trappers. Often as many as six of these playful animals romped together like kittens. They traveled up one stream, over a ridge and into another stream, and were very wise about being trapped. The trapper had to treat each trap with a kind of wax to prevent rust and disguise the smell of steel. Then the trap was set with the scent of fish oil and hidden deep in the water. After all this, if the otter was trapped, the hides were so heavy and the return so marginal that it was hardly worth the effort. Catching eight or ten marten, on the other hand, was a snap.

Although there were not many lynx around, Art Lintz devised an effective way to trap ones he knew to be available. At Quartz Creek he hung a bucket of rotten whitefish high in a tree and set four or five traps all around. The lynx, like all fur-bearers were drawn to the odor of fish and walked into the traps.

Of all the trappers on the St. Joe, Paddy McIntyre stood out as the legend. During the labor problems in the Coeur d'Alene mines at the turn of the century, Paddy left his home in Arkansas for a job as a strikebreaker. When the Northern Pacific train on which he was riding got as far as Deborgia, he and a friend jumped off but never got to the mines. He stayed on the Montana side of the mountains for awhile before coming to Avery during the teens. Soon he was established as the seasonal observer for the Forest Service at Needle Peak Lookout, and during the winter he made his rounds trapping. A tiny cabin he built at Bathtub served as home base where his grub was packed in, but on his rounds, he slept in a hollow cedar at Foehl Creek or even made himself a hole in a snowbank.

Paddy, who stood all of 5'3" in his dirty socks, could not read or write. His favorite statement was, "Brains is the cheapest thing ya' can buy." He held soap and washing in even lower esteem. He had one set of underwear that he put on in the fall to last all winter; a quick dip in the creek solved his laundry problem. Bob Cass as a young boy was terribly impressed with Paddy's cooking--bacon, eggs, fried potatoes like you wouldn't believe--and Paddy never even had to wash his hands after skinning hides! Over the stove in his cabin he hung a quarter of venison with the hide still on it. When it was time to eat, the portion closest to the stove had thawed enough so that all he had to do was hack a steak off and drop it in the pan. Guests sometimes declined a dinner invitation with him after observing rats scampering over the hardened grease on the stew. The eight or ten skinned animal carcasses sitting forlornly outside the door also did little to enhance one's appetite.

After a winter of trapping (and not washing) Paddy could be seen on a March day making his way out of the woods. On his small back were piles of hides, for he was a darn good trapper, and surrounding him was the aroma that comes from months without a bath or change of clothes. But after a bath at the roundhouse in Avery, he was socially acceptable and once again Avery's own endearing little character. One of the hardy ones.

Sandra Crowell
Sandra Crowell lived in Avery with her family in the late 1970s. A native of Colorado, Crowell has a BA degree in Speech and English from the University of Northern Colorado, at Greeley. She has taught in high schools in Colorado, Alaska, and Idaho, and has written various articles and columns in each state she has lived in. In addition to her participation in community affairs, Crowell writes poetry and is involved in education and politics. Crowell now lives in Chehalis, Washington, where she directs educational programs and teaches writing at the college level.

David "Norgy" Asleson came to the St. Joe country in 1966 as a seasonal employee for the Forest Service; his first job was as a lookout on Dunn Peak. Throughout his college years as a history/geography major at Moorhead State College in Minnesota, he continued to return each summer to the Avery Ranger District. Asleson later obtained a Master's degree in Geography from the University of Wyoming in 1975 before returning to make Avery his home. He began collecting research materials and photographs about the St. Joe in 1974, and played a major role in preserving local history. He left Avery in 1985, and currently works on the Priest Lake Ranger District after living in Washington, Montana, and Oregon.

The Idaho Statesman
Captivating. . . Every interesting place ought to have a book written about it that's as well done as "Up the Swiftwater: A Pictorial History of the Colorful Upper St. Joe River Country". the book's charm is that it documents reality, not just history. Long after more popular books are forgotten, people will pull up this book from library shelves to learn about early-day Idaho. I wish we had more such books about our state.

Kellogg Evening News
It's better than a history book. . . It's well written, accurate, and the pictures are some of the greatest of those available. I've heard the "Up the Swiftwater: A Pictorial History of the Colorful Upper St. Joe River Country" was a labor of love, and those who know the country know it's true.

High drama and low life - Sandra Crowell and David Asleson have chronicled both with a verve rare in works of local history. Thanks to their work-and to the scores of photographs they have assembled -(these small towns) will survive in our memory, if not on our maps.

The First Ones
The Strike of a Pickax Away
Homesteading
Avery
Rails through the Bitterroots
Barrooms, Bootleggers, and Bad Guys
The Devil's Broom: Fire in 1910
Changing Roles in the U.S. Forest
Contribution of the CCC
Trapping and Wildlife
Logs Down the 'Joe
Epilogue, Bibliography, Index