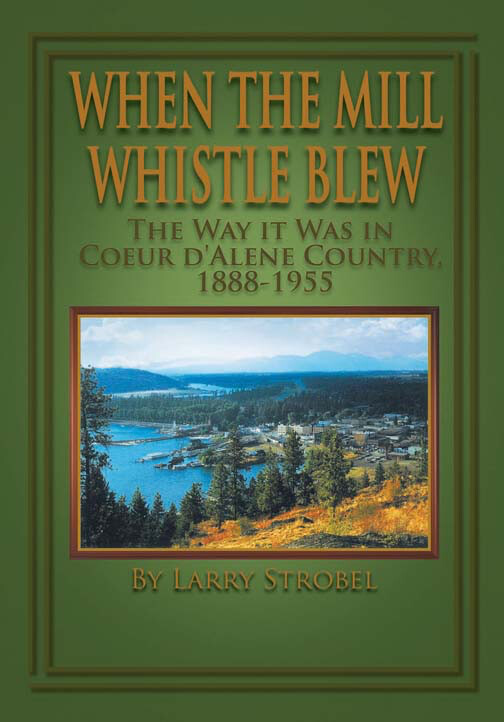 When the Mill Whistle Blew is the story of two pioneer families, who moved to North Idaho, proved up on homestead land and became acquainted when a matchmaker successfully made an introduction. Their toughness and hard work helped them overcome tragedies and hardships and led to development of orchards, farmland, a logging railroad and silver mine. We experience their everyday life told with humor, sadness and insight.

Coeur d'Alene was a lumbering town and the mill whistles regulated men's work hours and also the population's daily comings and goings. Downtown Coeur d'Alene in the 1940s and 1950s is pictured as seen through the eyes of a boy and teenager. The little neighborhood stores, the schools, teachers, classmates and people who made the city go are all here, many described with funny stories.

Experiences in a remote logging camp up Fishhook Creek south of Avery include hilarious tales of rough, tough loggers who have soft hearts and wicked senses of humor.

As I was saying my goodbyes, Dick Moyer took me aside." I know you've had a good summer here," he said with his Oklahoma accent. "Take my advice and find another line of work. The mud, the mosquitoes, the breakdowns, the constant danger-it isn't worth it." He was completely sincere. I had thought the woods would be my life's work, but the seeds of doubt had been planted by too many people.

Before I left I told Uncle John, "I think I'll enroll at North Idaho Junior College this fall."

"The hell, you say!" was his predictable response. He told me the reasons why my decision was a good one. He was obviously pleased.

Clyde and I worked together for two more weeks cutting trees in the mountains west of Killarney Lake. We drove out from home each morning; it was okay, but it wasn't like camp life.

One morning as we approached the work area, Clyde lit a cigarette and noticed he had only three left in the pack. "Grab me a pack of cigarettes out of the glove compartment," he said. I looked in-no cigarettes.

"I think there's a carton in the back seat," he said. I leaned over the seat and couldn't find any there either. We parked at the job site.

"Well, I'm sure there are some in the trunk," he said with sincere confidence.

The trunk couldn't produce any cigarettes either. Three cigarettes and we are nine hours away from getting home. He looked panic stricken.

"I don't need cigarettes anyway! I can go without them! I should quit anyway! It's a dirty habit! I should never have started! Don't you ever start!"

His fury spent, the fact was he did need them. He quietly sat down on a stump, measured the length of a cigarette, and then arithmetically concluded how far he could smoke each cigarette if he lit up every half hour. So for the rest of the day he would light up, puff really fast through the allotted inch or so, put it out and back into the pack. Good thing he had lots of matches.

We were cutting an area burned over in a forest fire many years before, leaving the strong and durable tamarack trees that could survive a fast-moving fire. They had become rotten, unstable and extremely dangerous to fall. Clyde made me stay way back; touch the saw to them and look out! One fell over while he was making the undercut, another collapsed downward onto the stump before it fell. Clyde was cursing and running, and I thought it looked like he was running in three directions at once. I didn't dare laugh.

It would be hard to say goodbye to my dear friend Clyde. I was going to miss him. No one could have been kinder or more caring than he was. His work ethic and positive attitude had me headed in the right direction.

I had worked all summer with only one minor injury, a cut on my right shin. My body was lean and hard, and I had actually gained some weight. I had lived and worked with an element of society that, at first glance, appeared to be mighty rough. But they were, really, mostly a collection of hardworking, caring, considerate, fun-loving men.

Without a doubt, I had gained an education in many ways. Most importantly, I had grown up. The boy was gone-the man had arrived.

Summer was over and it was time to move on. I would soon enroll as a full-time student at North Idaho Junior College.

Larry Strobel is a fourth-generation Idahoan, born andraised in Coeur d'Alene, descended from two pioneer families who moved west to North Idaho in the late1800s. Larry's prodigious memory served him well during forty years of work as a city mail carrier and helped him recollect his grandfather's stories of early days in Coeur d'Alene. Larry's humor, keen observations and love of music have enriched his life and make his stories memorable and enjoyable. Having spent twelve years as a member of the 560th Air Force Band (Washington Air National Guard) he continues to teach privately and play French Horn in several Coeur d'Alene bands and orchestras. His abiding interest in local history led him to the Museum of North Idaho, where he has served on the Board of Trustees since 1988. Larry and his wife, Sharon, have two grown children, Ronald and Shannon, and four grandchildren-musicians all.

Susan Nipp, Long time resident and author:
If only our history books were written in such an engaging style as Larry Strobel's "When the Mill Whistle Blew"! Because he is a superb storyteller, the reader feels the joys and struggles of everyday life in early Coeur d'Alene but with humor, twists, and interesting exploits. Not only do you love meeting these fascinating characters, you feel you are there with them.

When the Mill Whistle Blew, by Larry Strobel is a wonderful, interesting, easy to read and well-written book. It's much more than a story about Larry and his family history. The reader will also learn a great deal about the people, places and events that shaped the history of North Idaho and the Coeur d'Alene region.