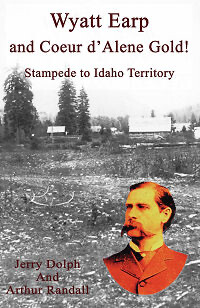 In January of 1884, 36 year-old Wyatt Earp and his third wife Josephine, and two brothers, James and Warren, joined in a "stampede" of humanity bound for the fabulously wealthy Coeur d'Alenes of North Idaho Territory. For a bustling enterprising America, this was the greatest bonanza of the day. Such notables as Calamity Jane, Monte Verde, Molly-B-Damn and thousands of other western characters were in attendance, as were veterans of both the north and south in America's great Civil War, as well as, gunfighters, gamblers and thieves who all joined forces in their search for riches.

Near the end of his life (above) Wyatt stands silently gazing out over the Colorado River, doubtlessly remembering a wealth of pioneer experiences and those who shared them with him; gunfighters, Indians, buffalo hunters, gamblers, rustlers and the whole gambit of humanity that forged our great nation's Western history.

Over the years, the fantastic wealth of the Coeur d'Alenes (first in gold, and then silver) has helped finance the budding of the west and continues to supply the nation with much needed precious and industrial metals. In 1985, the 1,000,000,000th ounce of newly-mined silver was brought up from deep within the bowels of the earth and production continues, with millions more each year.

The gold nugget (below) was found in 1997 laying on top of the ground, not far from the old towns of Eagle City and Murrayville (present day Murray).

After being in New York for four years, Maggie struck out in 1877 for the West on her own. She traveled to Virginia City, Nevada, which was the scene of a wild gold stampede. From there she moved on to San Francisco, up to Portland, Oregon, and back East again to Chicago. She supported herself by selling the pleasures of her shapely body, learning well the trade, which Burdan had forced upon her.

Maggie was in St. Paul, Minnesota, on February 3, 1884 when she happened across one of the Northern Pacific gold circulars in a St. Paul newspaper. The article with the circular told a fantastic tale of a great gold strike and the fabulous wealth to be had by all in the rugged mountains of north Idaho Territory. She immediately bought passage on a train bound for Idaho. It was a long uneventful trip across the flatlands of Minnesota and into Montana. The train passed through mountain ranges and many small towns. Then, at Livingston, Montana, an odd-looking man boarded the train sitting across the isle from her. As luck would have it, Maggie was about I have a chance encounter with the most famous woman of the West, Calamity Jane.

February 5-Tuesday-Calamity had tired of the peace and tranquility in Livingston and decided things would be "heating up" soon in the Coeur d'Alenes. She wanted to get in on some of the excitement, and so was on her way to Thompson Falls where she would ride over the Bitterroots on a pack train into camp.

Jerry Dolph traveled around the country working at a variety of jobs and in 1970, not unlike the stampeders of old, was lured to the Coeur d'Alenes by its promise of instant riches, well, a good paying job at least. Aside from all the "wealth," he was lucky enough to find his wife Jo Ann. When asked about his educational background, he said, "Give me a rock and a hammer and I know what I'm doing."

His writing career began, as it turned out, in 1988 when he was left disabled by an accident, in the depths of north Idaho's Lucky Friday Mine. He went on to write weekly columns for several newspapers and magazine articles for Rock and Gem, Gold and Treasure Hunter, International California Mining journal, Gold Prospectors Association of America and Mining Engineering. His first non-fiction book Fire in the Hole, the Untold Story of Hardrock Miners was published in 1994 by Washington State University Press.

Arthur Randall lives with his wife, Sylvia, in Hayden, Idaho. He obtained degrees in geology from the Universities of Idaho and Utah. He has a strong interest in history and archaeology and has published many articles and books on western ghost town history and geology. His interests in the current book stems from the fact that Wyatt Earp lived just a few miles from his home in Hayden.